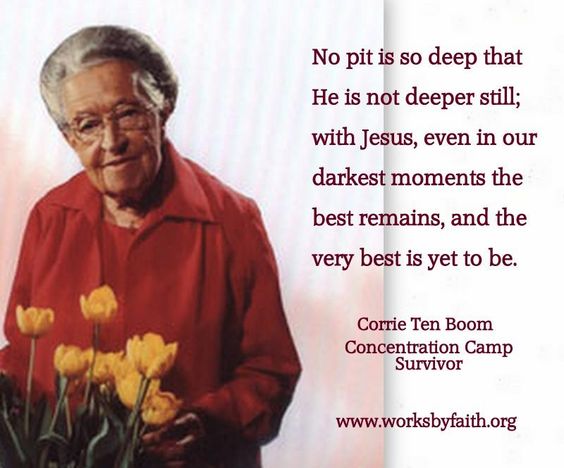 I can imagine all of us have had seasons of difficulties.  Actually, some more than others, it seems. Corrie Ten Boom – as above – survived a Nazi concentration camp. She and her family were tortured because they hid Jewish people in their home. She wrote a book about her experiences titled, “The Hiding Place.” Because of a ‘clerical mistake,’ she was released. I see the hand of God in her release as she did. Women her age were not generally released. As people of faith, the times of difficulty test the genuineness of our faith and help us grow in faith.  Corrie Ten Boom kept her faith amid horrific circumstance. She also shared that as she walked with the Lord, year after year, she understood less and less and just ‘abided under the shadow of the Almighty’ more and more. (Psalm 91.1)
Another woman of faith, Joni Earekson Tada, wrote a book and writes, “true wisdom-it’s found not in being able to figure out why God allows tragedies to happen, it is found in trusting God when you can’t figure things out. God is attracted to the weak, He is drawn to the needy, and He is near those who acknowledge their spiritual poverty. God lavishes His grace on those who consider themselves undeserving.” That describes many of us.
Some days are more difficult than others, but we have hope. We have the Living God Who leads us and guides us each day. When He leads us into the ‘wilderness’ – so to speak – He walks with us. One of the most encouraging scriptures to me describing God’s Divine providence and His making a way where there looked like there was not a visible way for help is Psalm 77.19 (the NLT) that reads, “Your road led through the sea…a pathway no one knew was there.” God is leading and He gives hope to those who feel they have no hope. He has 1,000 ways to deliver us from our circumstances.
We are encouraged to come to place where we say what Habakkuk 3.17-18 says – “Though the fig tree does not blossom, and there is no fruit on the vines, though the product of the olive fails and fields yield no food ,though the flock is cut off from the fold and there are no cattle in the stalls, Yet will I rejoice in the Lord…” He is a faithful God to help us.
Share your stories with us.